Dutch called Cliff about 5 o'clock last evening and told him his Kia battery went dead again and he needed his help.  Cliff and Dutch are "brothers."  Cliff got up off the couch, put his sneakers on, and asked me to go with him.  The past couple of days all he has done is sleep, barely eat anything, and I've had to make him drink fluids. 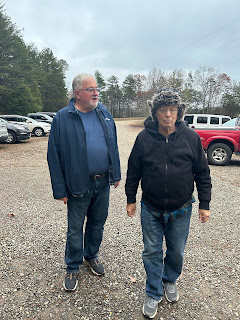 When we arrived Dutch told him he lied. The batter wasn't dead and he needed to go into the community center.  Cliff still was in a fog. 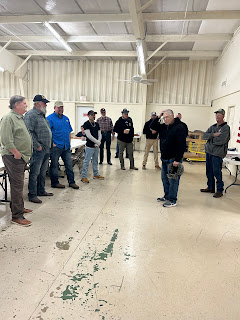 When he figured out his friends were there for him he became overwhelmed and filled with emotion.  I was holding back my tears.

Freddie, his Chief,is to the far right.  Our neighbor, Bill, is second body on the left and Jamie in the blue shirt.  Jamie loves Cliff and is the one who organized this celebration. 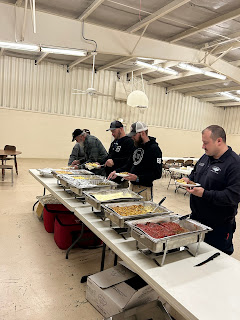 Meatloaf, chicken casserole, mashed potatoes, green beans, Cliff's favorite mac 'n cheese, coleslaw. But nothing appealed to him.  Kathy got him a small plate of mac 'n cheese and stuck it in front of him. After a while he nibbled.

Danny, in front of the meatloaf.  I don't know all the names.  Danny and his wife are both volunteers. 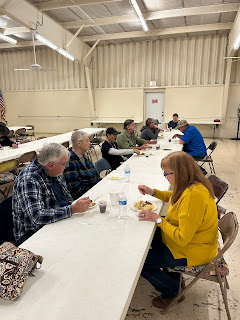 Kathy in yellow and her husband Dutch across the table.  Kathy is a cardiac nurse at Piedmont Atlanta.  It's comforting now to be surrounded by medical people. 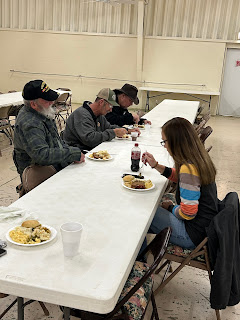 Doug dresses in black consistently.is tall and walks like Johnny Cash.  He's the County Extension Director along with Agriculture/Community Development Agent.  He just got my garden soil tested for me and explained the result numbers. 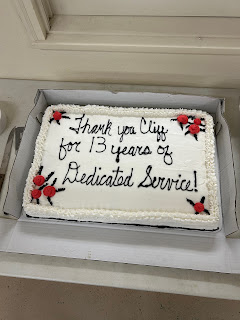 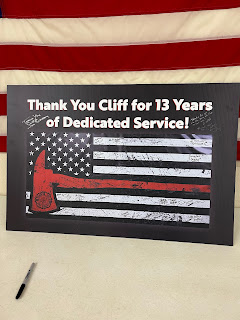 Beautiful evening.  Cliff did walk around to speak with everyone and thank them personally.  We stayed for about two hours and brought home some leftovers hoping he might eat some today. 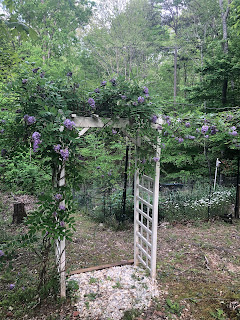 A few mornings ago when working in the lower garden, I heard baby bluebirds peeping and squeaking from one of the houses.  We weren't sure if there were any eggs babies.  Off and on during the day I would notice an adult sit on the roof or perch on a garden post before flying in.  This is the first year we've heard the babies.  Other years something always happened and the eggs didn't hatch.  Also, we're watching the geranium window box.  A couple days ago when there had been no sign of birds going in and out I pulled the box down, peeked in to see five eggs and carefully slide the box back on its shelf. Yesterday I slowly poured water into the edges of the box and frightened mother out.  So she's still sitting.  Wisteria full of bumblebees............. Tuesday Cliff began his new four-hour long chemo regimen with a pump attached for 48 hours that continued a second chemo. As the day went on he felt worse and spent the day restless, napping and just lying around in
Read more
- July 10, 2022 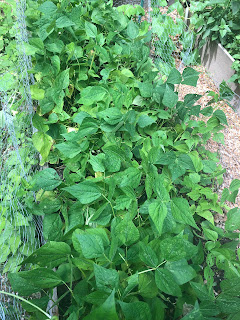 There have been good days and challenging days and the days run into each other.  Some mornings I look at the full pill square to see what day it is.  I find the better days as those when I get up with the sun and stay with  a routine.  Lucky for me this time of year is my outside time.  This morning I walked to the garden at 6:45 and dug up the poor beets.  My beets did not get the eight hours of sun that they needed so are puny and sad.  If they were sold at the farmers markets as "baby " beets they would be in a class of their own.  Every year is different.  If perfection is your goal, then gardening is more of a challenge.  Luckily, I'm not a perfectionist.  This morning the beans needed to be picked again.  We have enough for three more meals but not enough to preserve.  My bean patch is only large enough for our weekly meal supply. Rogue flowers are popping up all over the garden but we're not seeing the hummingbirds, many bees, or butterflies this year. This m
Read more
- August 06, 2022 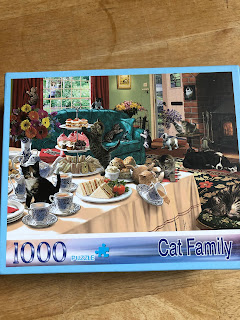 Lauria sends us jigsaw puzzles, usually 750 pieces, but this time this one arrived.  A few years ago a friend sent me one of multi-colored, various shapes and sizes, ocean seashells. I wanted so badly to solve it but after trying man strategies, got frustrated and put the dang 1000 pieces back where it belonged......in the box!  So when I saw this very busy puzzle I set it on a table where it rested for a few weeks before mustering up the courage to open and spread the 1000 pieces onto three pre-cut cardboard slabs.   I was presently surprised when I discovered letters on the flip-side of the puzzle pieces.  We've never seen this in previous puzzles. After flipping all pieces to show letters, the shapes then were separated into to  nine sections, a through i.                                                       Today, less than a week after opening the box. The puzzle is from China so "a" section is to the far right and "c"is left.  I decided to go to "g&
Read more